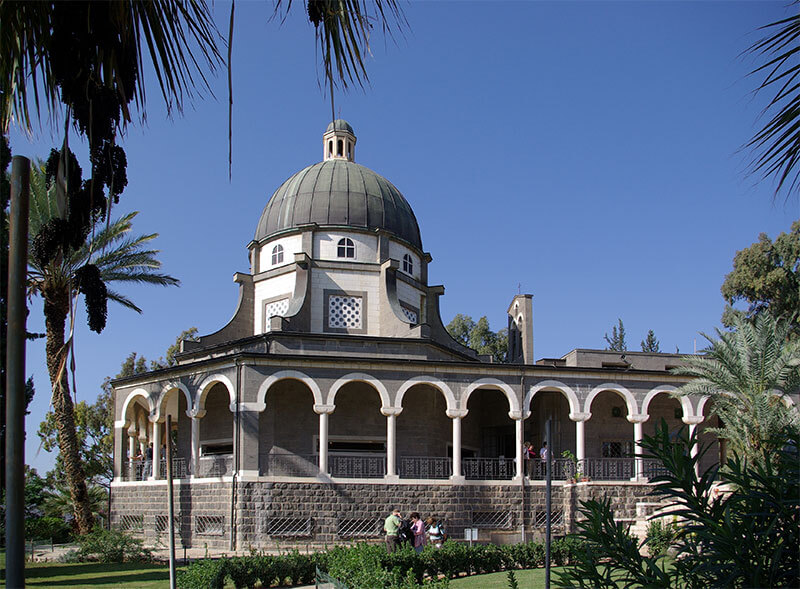 Excursion to the churches around the lake Kinneret (Sea of Galilee)

In the north-west of Lake Kinneret, Jesus began a three-year mission, laying the foundation of Christianity. Here Jesus delivered his first sermons, here he performed his miracles, and here he gathered his first disciples, who later became his apostles all over the world. Today, in quiet gardens, along the shores of the Sea of ​​Galilee, are open to the church of amazing beauty, dedicated to the events that occurred in these places two thousand years ago. These churches, gently guarded by ministers, are a great way to get to know the Christian world.
In order to fully enjoy the atmosphere of these places, we suggest staying on the Kineret Beach for the night, in a guest house, or simply set up a tent on the beach (Hakuk Beach). 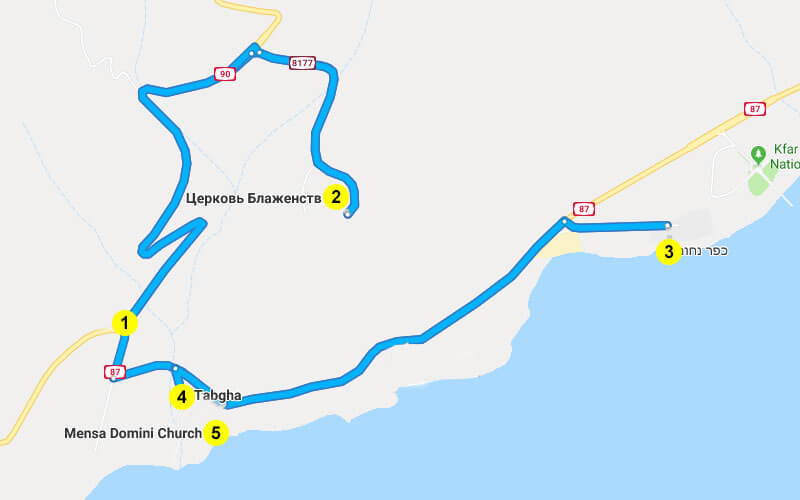 
Church of the Mountain of Beatitudes

The beautiful church is located at the top of the mountain, with a stunning view of the Kinneret, the Golan Heights and Galilee. According to Christian writings, here Jesus gave his disciples and followers the "Preaching on the Mountain" (also called the "Preaching of Happiness"). Here he chose 12 apostles.
The church was built between 1936 and 1938 according to the plan of the Italian architect Antonio Barluzzi. The building is built in the form of an octagon, symbolizing 8 blessings. The complex also includes a monastery, a farm of the Italian mission and a hostel of the Franciscan monastery.

The Cradle of Christianity

Continue our way along Route 87 to the east. The old town of Kfar Nahum (Capernaum) in the north-west of Galilee was the center of Jesus’s activities: here he met the first apostles, preached in his synagogue, and performed many miracles in the vicinity. Here he walked on water, calmed down storms, drove out demons and healed the sick. 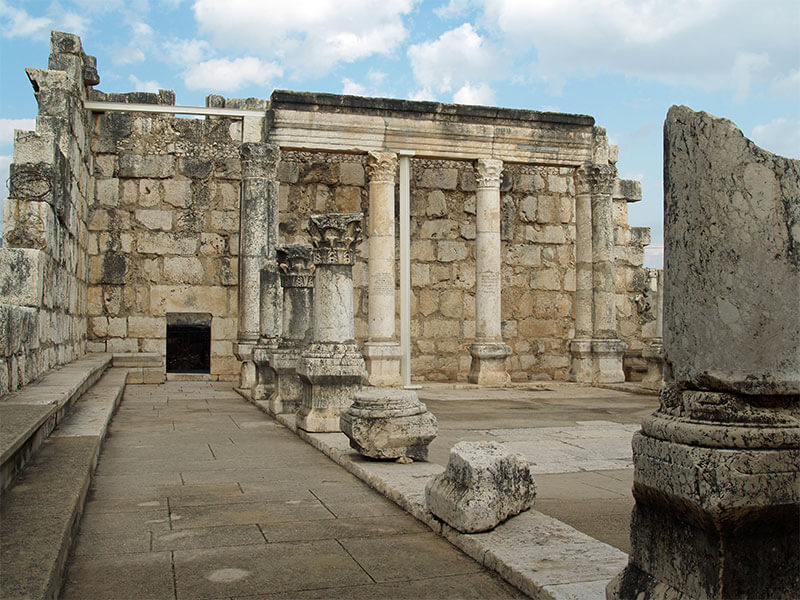 When Christianity became the dominant religion in the Roman Empire, Christians consecrated these places and built churches on them. These churches were apparently destroyed by the invasion of the Persians, and over time their exact place of construction was lost. At the end of the 19th and the beginning of the 20th century, the sites were re-identified. Some of the lands in the area were acquired by various Christian associations, and new churches were built on the remains of ancient ones. Tabha, Mount of Beatitudes and Kfar Nahum together form the “Holy Triangle” that perpetuates Jesus. The trip begins where he decided to transfer his sermon to the masses of believers - on the Mount of Beatitudes. 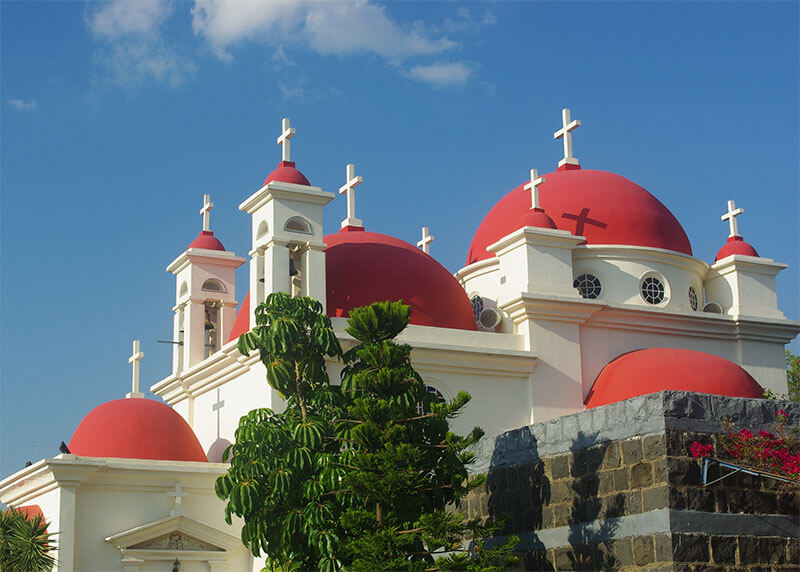 The Church of the Multiplication of Bread and Fishes - Tabgha

One of the most sacred places for pilgrims. According to Christian sources, Jesus performed a great miracle here when he managed to feed 5,000 people with five loaves of bread and two fish. The church has an ancient mosaic floor, which describes the miracle, fauna and flora of the Sea of ​​Galilee.

The Church of the Multiplication of Bread and Fishes - Tabgha

One of the most sacred places for pilgrims. According to Christian sources, Jesus performed a great miracle here when he managed to feed 5,000 people with five loaves of bread and two fish. The church has an ancient mosaic floor, which describes the miracle, fauna and flora of the Sea of ​​Galilee. 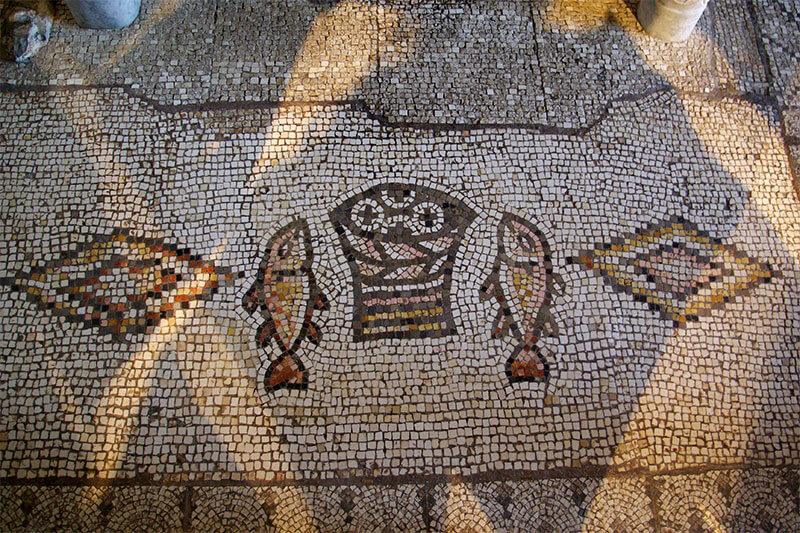 To the South of Tabgha is the Franciscan superiority church of St. Peter (Mensa Domini). According to Christian sources, Jesus was opened to the disciples after the crucifixion, and here he appointed St. Peter as his first envoy. So, in fact, Peter was the first Pope.
The church is built around natural stone, where, according to tradition, Jesus gave a feast for his disciples. Basalt stone temple is located on the banks of the Kinneret. A soft and colorful light penetrates through its stained glass windows. Inside there is a picture in which the Pope kneels on a rock, where Jesus and his messenger stood, and behind them a wooden ship. 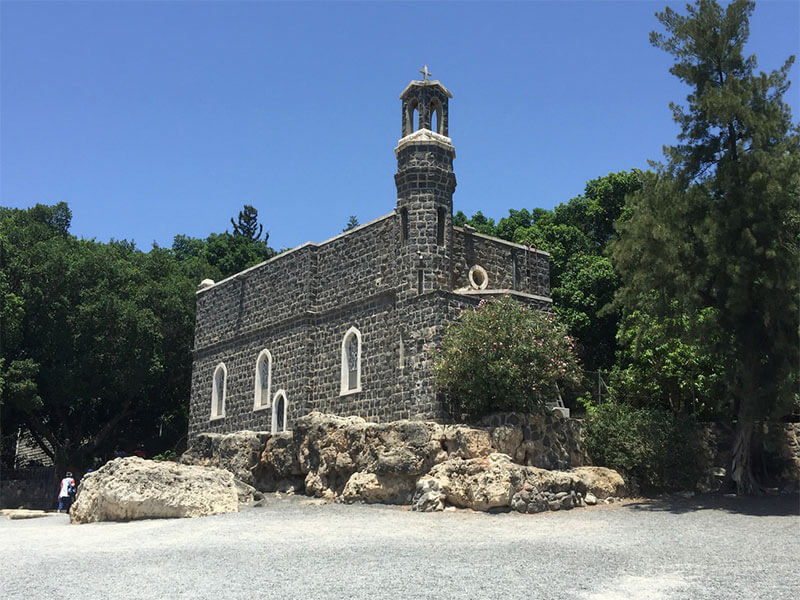 During the excavations in the area were found the remains of an ancient fishing village, including the pier and residential buildings. Among the remains is an ancient synagogue, one of the largest and most magnificent in Israel. The synagogue is built of marble and white limestone, and is decorated with various Jewish symbols and ornaments from the plant and animal world. Here, according to Christian sources, Jesus delivered his sermons to the synagogue. Next to the synagogue is the house of the Apostle of St.. Petra. Jesus lived in this house when he stayed in Capernaum. Above the remains of the house is a modern church, where thousands of pilgrims come. 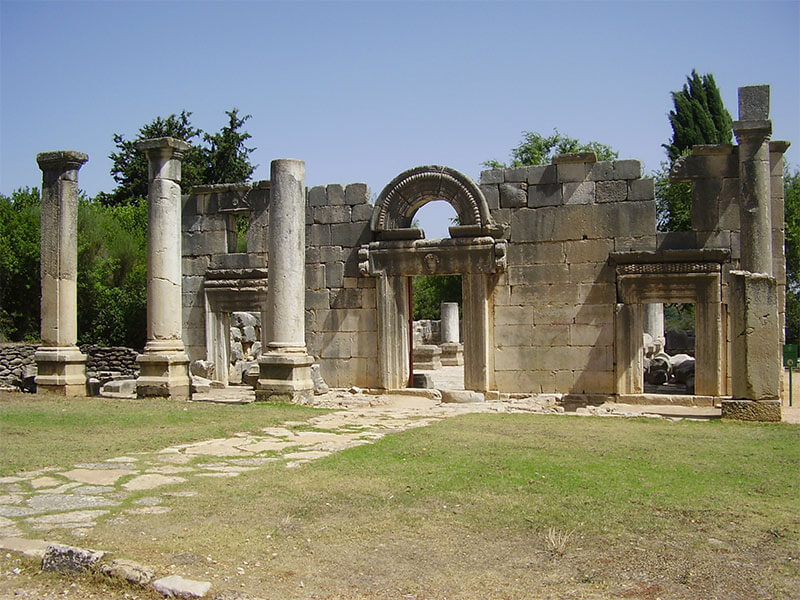 Between the Capernaum embankment and Tabgha (and the Church of the Gospel of St. Peter) there is a staircase leading to the shore of the Sea of ​​Galilee. If it were not for the cars parked there, it would be impossible to guess that the stairs would lead to Ain Ayub - a hidden waterfall. The staircase descends through the northern fence of the monastery of St.. Petra, at the top you have to turn right and you will immediately see the waterfall. Jewish sources say that the school of Job was in Tiberias. Ancient Arabian source claims that Job was washed by the water of a waterfall to recover from the heat, which the devil hit him. And here, on the shores of a beautiful lake, on a place where shrines, Jewish, Christian and Muslim traditions join, we complete our trip.

© 2015-2019 HolylandCars - car rental services in Israel. All rights reserved and belong to the Hollyweb company.