Car trip to the Golan - from Banias to the Orah crossroads

Highway 98 is Israel’s eastern road. Previously, this road was open only for heavy military equipment and only 30 years later it became possible to travel on it in a private or rented car. Hermon's snowy peaks, Druze villages with their traditions, thriving Israeli settlements and very beautiful nature are what you can see when traveling on Route 98. 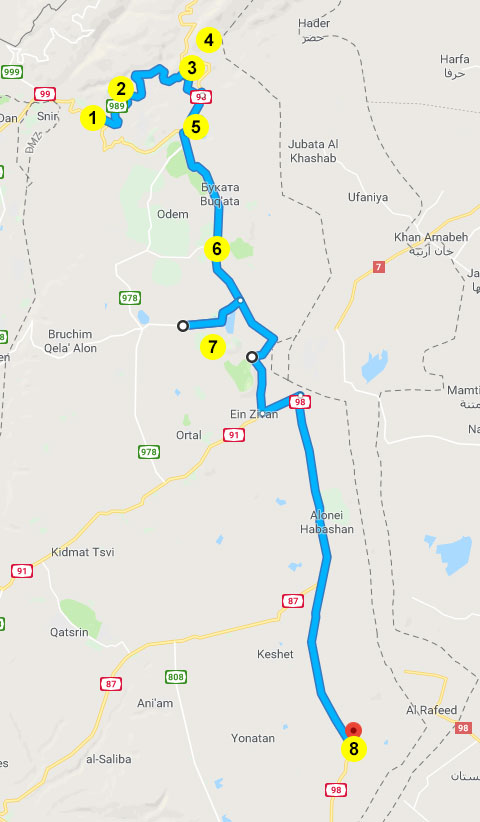 From Kiryat Shmona, turn right at the intersection of Zion, and continue along Highway 99. After about a minute and a half, turn right to Banias Falls. Here the path passes under beautiful fruit and fig trees and near the tents of the Druze, selling fruit from the Golan Heights from the counters. After a few hundred meters, the road turns sharply to the left, enters the Banias reservoir (on the left) and reaches the intersection. This is our starting point (1).

At the crossroads (1), turn left onto road no. 989 and start moving up and you will see a magnificent landscape. On the left, you will see the Hula Valley, the town of Kiryat Shmona and the Nimrod Fortress. After about four kilometers the road goes east, and on the left you see the entrance gate to Nimrod National Park (2). The fortress occupied a strategically important position and controlled the road leading to Damascus. From time to time, the fortress passed from hand to hand throughout history and withstood 7 major battles. Throughout history, the fortress. It was owned by Sunni Muslims, Ismailis, Mamluks and even Mongols.

After another kilometer, on the left, there is a beautiful oak grove with a holy place called Makam Nabi al-Zuhri. Near the road there is a monument to the fallen soldiers of the intelligence unit of the subunit "Egoz". Later, you pass by the gates of Moshav Neve Ativ, founded by soldiers from the Egoz patrol, whose name is an abbreviation of the four names of their comrades who fought on the Golan Heights. And after another kilometer we reach the intersection, where we will see the entrance to the large Druze village of Majdal Shams, turn right onto the road number 98, drive through the filling station and enter the center of the village (3).

Those who want to visit Mount Hermon, turn left on the signs and will continue to climb the snow up the mountain. Those who continue the trip will turn right and drive a few hundred meters down the street, right up to the monument to the memory of Sultan al-Atrash, the leader of the Druze uprising in Lebanon in the 1920s and the national hero of the community. Sultan, riding on his noble mare, symbolizes the pride of the Druze.
Now we are driving along a beautiful green road between plum trees and apple orchards. On the northeastern edge of the village, the road turns south and in front of you is a relatively high hill - the Hill of Screams. East of the Hill is the border between Israel and Syria (4). Here live large Druze clans. Now you can relax and unwind, as well as have a tasty lunch and a drink in a Druze restaurant called A-Tina.

After about 2.5 kilometers, the road passes near Neve Yafuri, one of the holiest tombs of the Druze. The Prophet Yafuri is the reincarnation of the man of morality of al-Gafari, one of the people of the Prophet Muhammad. On Saturdays, families of the community gather here. You can visit the cheap local food market. In the market you can buy very tasty fruits, honey, olive oil.

About half a kilometer a country road leads to the Ram Basin (5). This is a natural reservoir, a great place for a picnic and fishing. Even in ancient times, people tried to solve the riddle of its formation. Today, it is generally accepted that hidden sources, along with the melted waters of Mount Hermon, nourish the pool. According to another theory, this is the mouth of an ancient volcano or a space created by the melting of a chalky rock. Many legends are associated with a mysterious pool. In Greek mythology, it is said that the god Pan lost his flute here and discovered that it later swims in the waters of Banias.

The road leaves the parking lot of a large pool, passes through a narrow bridge over the Nahal Saar and connects to Highway 98, which descends from Mount Hermon. Turn left, and after a kilometer you will arrive at the restaurant food court. There are several popular restaurants where they cook delicious falafel and baklava soaked in honey. Turn left onto Route 98 and exit the city.

After approximately 800 meters, you will reach the Jaara Odem junction. Now, after passing through the fairy-tale forest, turning right onto the road number 978 and driving through the forest for about four kilometers we reach the moshav Odem. From highway junction 98, it continues south and runs four kilometers along the town of Bukata. After three kilometers, you will see Mount Hermonite on the left, and on the right, the kibbutz El Rim. At the entrance gate to the kibbutz, turn left (east) across the road (6), passing between the apple and cherry groves of the kibbutz, drive to the memorial section of the Battle of Tears and the monument to Bashton. Through this valley, Syrian forces attempted to break into Quneitra. A damaged Syrian tank stands in place in memory of 350 such tanks that were destroyed in this battle. In that battle 76 Israeli soldiers fell.

The road continues along the ridges and outposts and we drive up to the Bar-On junction. The mountain that rises south of the junction is Mount Bental. To climb it, you must turn right (west) onto the road number 959 and walk 2 kilometers to the intersection. Here, turn left near the sign for Merom Golan. This is the first kibbutz built on the Golan Heights, just a month after their conquest in June 1967. We drive past the local packing factory and the entrance to the kibbutz (left), and after a few hundred meters, turn left again and begin to climb steeply to the top. We arrive at the parking lot (7).
The high mountain (1165 meters) is one of the mountains of the volcanic ridge in the eastern Golan. The view from it is a beautiful and impressive view of Mount Avital with its antennas in the south along the entire border, and especially the Syrian city of Kuneitra from the opposite side (east) and looks like a ghost town. The border is very close. In fact, the mountain is a military outpost. And if you want to dive deeper into the atmosphere of this place, you can order a cup of espresso at a local cafe, which is located on the top of the mountain named after Kofi Anan. Sometimes you can sit there among the clouds.

Exit quickly and turn left. After about a kilometer you will reach the intersection and turn left again. Pass by the left turn to the Avital mountain, go back to the highway 98 and move south to the slopes of the plateau. At the Zivan Junction, turn left to continue, drive about 2.5 kilometers and turn south again along the straight road section. The road passes by a series of wind turbines. In fact, all highway number 98 is the Syrian road. The Syrians laid most of it up to the 1960s in order to link Hermon in the north with Hamat Gader in the south and served mainly for their military needs. After conquering the Golan Heights, the inhabitants of Golan enjoyed this stretch of road, but during the Yom Kippur War, the main stretch of the road was hit by a barrage of Syrian missiles. Since then, until 2008, the road has not been so reconstructed and is used mainly for heavy military vehicles, as well as for private cars.
Now your car can continue on its way: we will drive a few kilometers from the Syrian border, and after about seven kilometers the highway will surround Mount Perez from the west, and after another three kilometers will reach the cross over of Orach (8).
On the left is Givat Oraha (fast Jukhadar). For a moment, you can stray from the road and walk up to the old and smooth tower, which served for years as an IDF forward observation post in Syria, and then continue south to Hamat Gader or turn north to Ramat Magshimim and then go down to the Sea of ​​Galilee (road number 808) and take the road number 87.

© 2015-2019 HolylandCars - car rental services in Israel. All rights reserved and belong to the Hollyweb company.